Metaphors Inspired By Nature in Hasan Onat’s World of Thought

Prof. Dr. Hasan Onat used a number of metaphors inspired by nature in his expressions in understand to phenomena of religion, science and sect and the manifestations related to them and to make them understandable to his interlocutors. He introduced the “river metaphor” to clarify the perception of the process in the minds of Muslims; the “bee-honey metaphor” to explain the relationship between knowledge and science; and the “acorn metaphor” to make the process of forming sects meaningful. Hasan Onat, who calls on humanity to listen to the bottom sounds of nature, has created these metaphors as a result of his discoveries about nature, and he give us important clues about his process of making sense of life. The study focuses on three important metaphors that Hasan Onat has systematically made, inspired by nature, from the metaphors found in the world of thought. In this context, the scientific heritage of Onat, including oral narratives, and the data in his academic work, will be evaluated in a holistic manner. 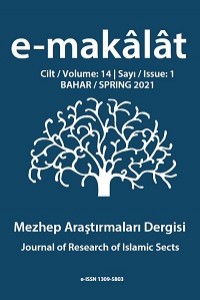