The work of Abû Mutî‘ Makḥûl ibn Faḍl al Nasafi, “Kitâb al-Radd ‘alâ ahl al-bida‘ wa-al-ahwâ al-ḍalla” can be said to be one of the oldest works in the Hanafi maqalat tradition in which Islamic sects are classified with the system of 6x12+1=73 based on the 73 sects narrative. This classification system used by Nasafi has influenced many authors after him, especially the Hanafi maqalat authors. However, the scholars using this system are not limited to the Hanafis. Hanbali scholar Abu’l Farac Ibn al Jawzi, who can be considered among Hadith Supporters, also uses a classification based on the 6x12+1=73 system in a part of his work called Talbis Iblis, and this classification is similar to the classification of Nasafi in many ways such as naming the sects, as well as ordering and defining the sub-sects. In this study, the classifications and sects in the two works will be compared by paying attention to the whole of the texts, and the similarities and differences between them will be tried to be revealed by taking some Hanafi and Hadith Supporters’ maqalat works into account. 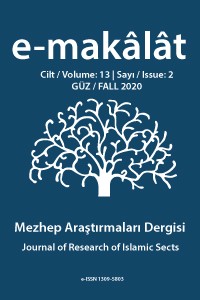